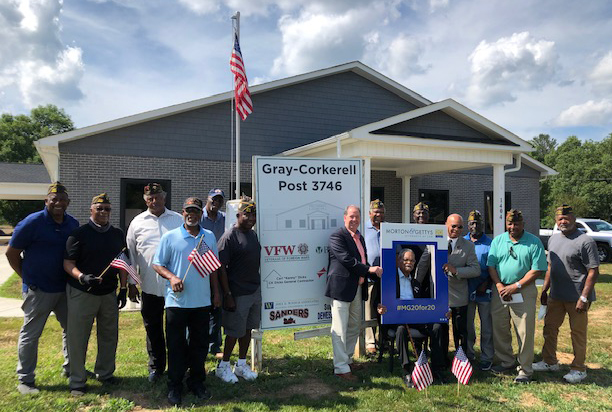 Gray-Corkerell VFW Post 3746 was formed in 1938 by 17 local veterans of the First World War who were barred from joining the existing, all-white post because they were black.

When younger African-American veterans came home from their own global conflict in 1945, they joined the post, and promised the founders they would keep the fellowship going. A generation later, those returning from Vietnam made a similar promise. And today, the post is nearly finished building a much-larger, modern post that will offer greatly expanded services to veterans in the Rock Hill area.

Now, another local institution celebrating its own heritage, Morton & Gettys law firm, is contributing $2,000 to help the post finish the job. This is the fifth such monthly gift that has gone to a community organization in celebration of the firm’s 20th anniversary.

Founding partner John Gettys, who selected Post 3746 to receive the gift, says it is intended to challenge the rest of the community to step forward and help complete the funding of the new center, which he says “will be an asset to the community once completed.”

Charlie Robinson of the VFW post, who is the building chairman, says he and his fellow veterans broke ground for the new facility in October 2019, just a short while before the pandemic hit. They plan to have it finished by July 4. The project costs about $700,000, of which the veterans had managed to obtain all but about $30,000.

The old post was tiny – “maybe 750 square feet, if that much,” says Mr. Robinson. It wasn’t handicapped-accessible. The new one will be 5,400 square feet, and thoroughly modern. It will have so much space, it will be able to rent some of it out for community events.

More than that, there will be plenty of space help veterans get the care they need, helping them fill out forms and do other things to see they receive the benefits they have more than earned.

“The VA does not make it easy for them to get their benefits,” says Mr. Robinson, “and we have people in our post right now who can help.” He notes that a lot of older veterans are not computer-savvy. “Some go back to the Korean War. A lot didn’t finish high school back then.”  He knows the frustration because he has a claim of his own with the VA that he filed in 2014. “It’s gone to Washington twice. They have not finalized the approval.”

Mr. Robinson and his fellow members have a lot of stories like that. They also have some blood-curdling stories to tell of their time in combat. Charlie Robinson himself was stationed at an Air Force post that was at the very northernmost point of South Vietnam – so far up that the first time he saw it on a map, he thought it was in North Vietnam. There, he and other radar operators guided and tracked B-52s and their fighter escorts on missions over the enemy in the north.

The base was regularly under attack. He tells of how the man he was sent to replace was killed by a rocket in his Quonset hut the night before he was to go home. Mr. Robinson is overcome with emotion when he tells about the smell of the dead after the massive attacks of the Tet Offensive.

In Post 3746, he’s far from alone in having such stories.

“There are so many stories that we’re just losing to time,” says John Gettys. “Too much of our history has been lost.” Mayor Gettys says the new post has a purpose not only to the veterans, but to the rest of the community. It’s the kind of strong, African-American institution that Rock Hill needs more of.

That’s why M&G is stepping up to help, and urging others in the community to do the same.

“Having veterans fight for our country and not being allowed to congregate with other soldiers when back home is part of our history as a community,” he says. “Having the opportunity to step forward and assist in this effort is a testament to the promise of our shared future.”

“My hope is that the people of our community step forward to raise this last bit of money necessary for the Post’s purposes so that we can prove once again that there is nothing wrong with Rock Hill that cannot be fixed by what is right with Rock Hill — our people.”