The Miracle League of Rock Hill, which provides opportunities for children and adults with disabilities to play baseballregardless of their abilities, was just launched last year. Julie Hord, who helped the program as a volunteer in its first season, now can’t wait for the second to begin.

Julie is a real estate paralegal with Morton & Gettys law firm, and she is so impressed with Miracle League that she nominated it to receive the first M&G Gives donation of 2022. The program, which is run by the City of Rock Hill Parks, Recreation and Tourism, will receive a $1,000 check from the firm to help kick off the new season, which starts March 19.

The firm launched the special giving program last year as a way of celebrating its 20th anniversary and saw it as so worthwhile that it continues into 2022. While Morton & Gettys gives to many other organizations, the idea in this program is to bring special attention each month to one recipient that 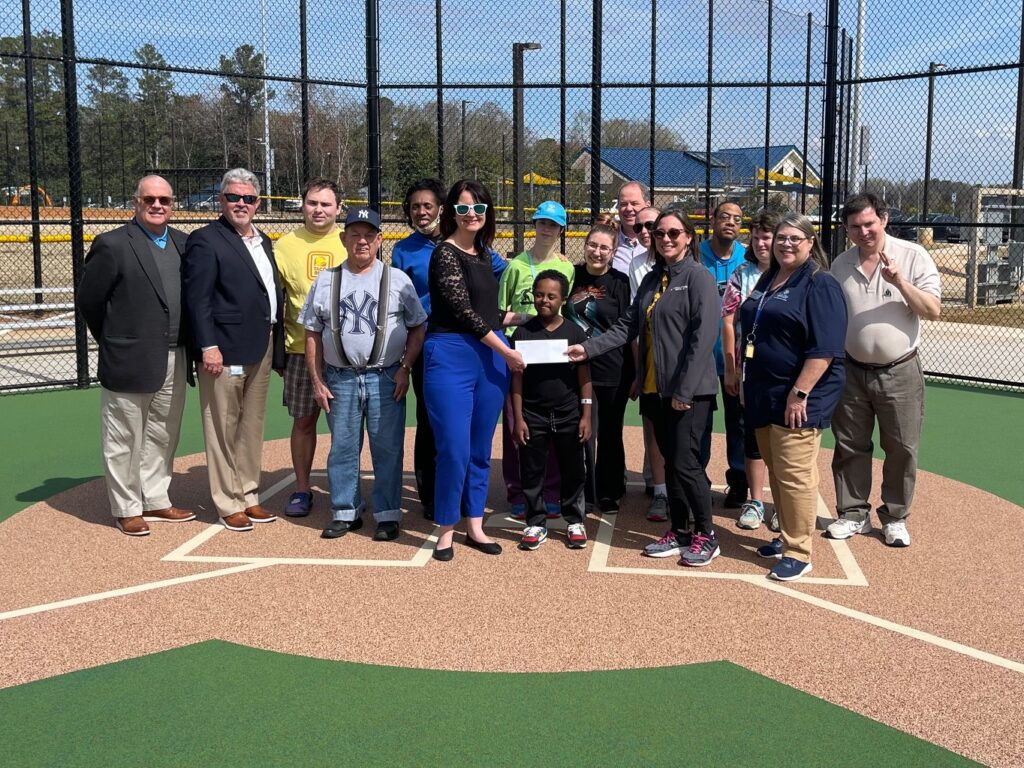 And Julie saw this program as definitely deserving of that.

Julie grew up with a cousin with Down’s Syndrome, and “Our special friends in our community have always held a special place in my heart,” she says. When she heard about this new program last year, she volunteered to become a “Buddy,” which is a volunteer who helps the player participate in the games at Miracle Park, at 1005 Eden Terrace in Rock Hill. “You don’t even have to have any experience,” she says. You just need the willingness to help.

The effort is worth it, she says. “This is one of the most fulfilling and heart-warming things I have ever been a part of,” she reports. “I was matched with the sweetest little boy, and plan to be his Buddy again this year, as I was told he was the very first kid to sign up for the new season.”

Becky Adams, coordinator of the Rock Hill Parks Foundation, expressed her appreciation for the contribution, and urged others to help out if they can.

“The league has several areas to volunteer,” she said. “We need a peer buddy for each player. This season we have eight teams and 108 players, so we need at least 108 buddies.” She said the league also needs umpires, assistant coaches, mascots, mascot helpers, game day helpers and registration table helpers. Learn more about the program here.

Julie testifies that this is “just really something incredible to be a part of. It’s really fun, and you will smile the entire time.”

You can also contribute financially, as Morton & Gettys is doing. Monetary donations help pay for uniforms, hats, and sporting equipment. Financial support for the Miracle League of Rock Hill can be provided here through the Rock Hill Parks Foundation. Or you can mail a check – with “Miracle League” on the check memo line – to: